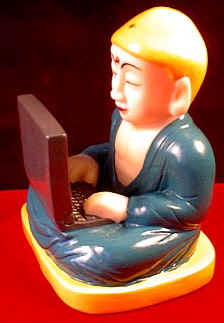 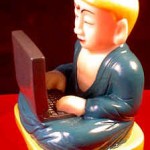 Last weekend I was honored to be one of the presenters and attendees at the 2011 Australian Meditation Conference in Melbourne. It was interesting to learn from others there about medical and scientific research concerning the benefits of meditation and to listen to other long-time teachers talk about their experiences. At the end of the afternoon, a few of us were asked to join a panel discussion of the “future of meditation” and took questions from the audience.

The conference coincidentally took place just a day or two after the passing of Steve Jobs, one of our leading visionaries who has ushered us into this new and unprecedented era. Thanks to personal computers, the internet, Facebook, smartphones, iPods, and all the rest of the technological miracles, the ways we spend our time, communicate, and think have totally and irrevocably changed.

The full impact and depth of such changes will probably not be fully realized for decades.

What such a massive transformation bodes for the “future of meditation” is an intriguing question. As one of the conference participants noted, many of us are now concentrating even deeper than ever before, riveted one-pointedly on our handheld devices, focused with laser-like concentration on Twitter, email, text messaging, and web surfing. Such an ability to block out extraneous stimuli and become fully absorbed into the screen might well be the envy of the traditional meditator.

But, on the other hand, our attention spans are shrinking dramatically. Juggling between information sources, channel surfing, and multitasking have left us all with a general case of A.D.D. If we understand meditation to be the ability not only to focus but to sustain concentration for long periods of time, meditation may well be an endangered species.

Let’s see.  Meditation might survive as a palliative for stressed out omni-communicators and those traumatized by information overload. Or it might become a dinosaur, a remnant from a past when the mind moved slower and there wasn’t so much to keep track of.  Or it might morph into something new altogether.

There might not be a future at all for what we know now as “meditation.”  But, then again, perhaps meditation has never been a stable thing. Perhaps it has always undergone changes and shifts according to time and place, transmutating and re-contextualizing according to changed circumstances.

What is the future of meditation in an age of info-glut and instant messaging?  The crystal ball is a bit hazy. . .